Skip to content
Home » News (Posts) » Entertainment » Tamera Mowry-Housley Makes Tearful Return To The Real: “Our Country Is Sick… It Needs Healing From Within”

After news broke about the Borderline Mass Shooting in California, people were struggling to find their loved ones. One of the loved ones lost was the niece of Adam Housley and Tamera Mowry-Housley, Alaina. 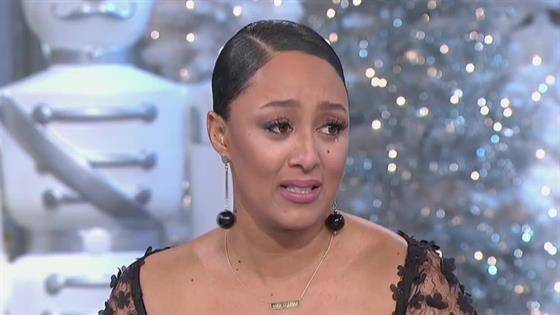 After the news of Alaina’s murder was received, Tamera took 2 weeks off from The Real to be with her family during the time. While she was missed, and the show had people fill in for a day(s), the fact remained that the people were missing Tamera’s voice. People wanted to know how she was. After previously speaking on Alaina’s murder with Adam, and Alaina’s father Arik, Tamera returned to The Real today to address her audience.

“I’m sorry,” Tamera said as she tried to continue. “Our family’s been through a lot, but the interesting thing about grief is that you’ve gotta find the balance of moving forward and grieving at the same time. It’s just been a little over two weeks…she would want me to be here. And she would want me…sweet Alaina…to move forward. I don’t like to say move on, because I don’t think I’ll ever move on with the fact that she’s not here with me or with our family.”

“But she would want me to move forward and to use her voice as a catalyst for change, and that’s why I am here today,” Tamera continued. “And I just appreciate the outpouring love and support from everybody. That sweet 18-year-old girl impacted people in such a positive way, and that’s how we’ve been able to move on, the love as my beautiful sister-in-law Hannah said at my niece’s memorial, that’s what we need more today, love.”

After being asked “…What do you think that we as a country can do to make sure that something like this never happens again?” by co-host Adrienne Bailon, Tamera went on to share her personal thoughts on Gun Safety, and the current state of this country.

“Oh. Where do I begin?” Tamera replied. “It’s obvious that we need change when it comes to gun violence. I don’t care if I have to knock on the doors of the White House to do it. Alaina was very sweet and loving and kind. She was also a debater. So she would want me to debate that. But also, I believe that it starts from within. Our country, and it’s sad to say this, but you have to be living underneath a rock to not believe these words, our country is sick. It’s diseased. If it needs healing. It needs healing from within. We are so divided.”

Tamera also explained “Alaina’s Voice,” which is the campaign started by the Housely family to honor Alaina’s memory. Hoping to make a change.